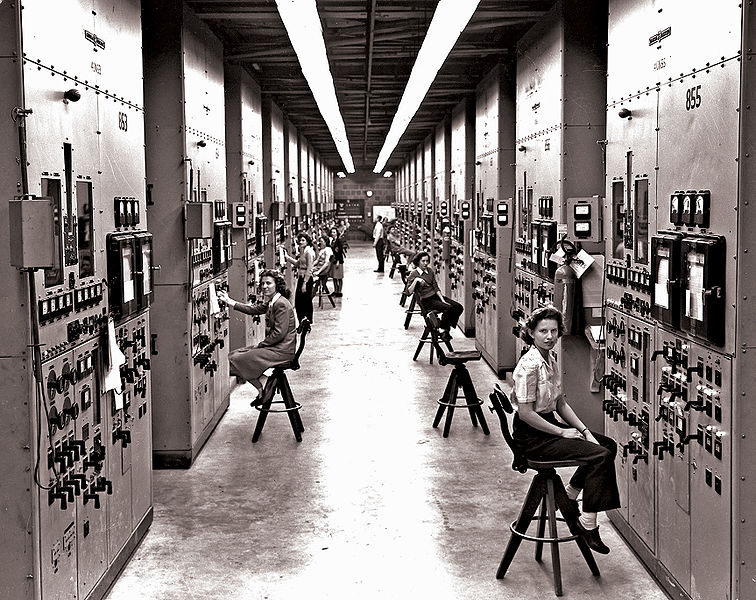 “The Doomsday Clock stands at one minute to midnight.” The magnitude and urgency of the challenge we face was apparent from the opening speech of COP26. We have just a few years left to drastically reduce emissions. If we fail, feedback loops will accelerate climate change and make it far more difficult – perhaps impossible – to tackle the problem. For the ‘least bad’ outcome of 1.5°C warming, the Intergovernmental Panel on Climate Change recommends halving emissions by 2030, and reaching net zero by 2050*. The grounds for pessimism and defeatism seem very real. The political and technological challenges seem overwhelming. But we have been here before.

Remembrance Day gives us an opportunity to reflect upon the two world wars and remember those who have died in conflicts. The Second World War was an arms race: a period of intense scientific activity and technological developments. Winning the war relied upon having the best weapons, computers, communication technologies and medicines. And the speed at which these inventions were made and brought into use was phenomenal. During the six years of the war, nuclear weapons (the ‘Manhattan Project’), superglue, radar, jet engines, rockets, jeeps, synthetic rubber, duct tape and helicopters were all invented. Phenomenal advances were made in aeronautics, computing, chemical engineering, medicine and food science. Time was of the essence, and scientists and engineers – backed by governments – rose to the challenge.

Seventy-six years on, we are again in great need of technological solutions – and time is once again of the essence. At current rates of progress, we are heading for disaster. The fusion reactors that are still ‘fifty years away’ will arrive too late. Lab-grown meat will arrive on our plates long after global warming’s feedback loops have kicked in. By the time electric planes become the norm, the economic impacts of runaway climate change will make overseas holidays a rarity for most people. But history tells us that, with the right investments and organisation, things could be very different. We could soon have geothermal energy in every country, thin-film solar so cheap that it is rolled out onto every roof, and lab-grown sausages that are cheaper than – and just as tasty as – the best pork-based banger.

There are alternatives to technological solutions, and some of them will be necessary. Taxation and rationing are effective strategies – but they will be hard to stomach on the scale required. Halving emissions by 2030 means giving up some of the things we love. We could drastically reduce consumption of carbon-intensive products, but without truly decent alternatives, we’re unlikely to. Solar power is 99% cheaper than it was in 1980, but it’s still not cheap. We could cycle more, but our workplaces are not going to move closer to our homes overnight. We already have low-tech alternatives to meat and dairy (they grow in the ground), but the world’s population is growing much faster than veganism. We could use existing technologies to get out of this mess, but it will be far more politically feasible to develop new ones.

There is one important caveat here. A paradox can exist with technologies that help us do more with less: they can increase consumption of the very resources one is trying to conserve. By an effect known as Jevons Paradox, they can increase greenhouse emissions. For example, a technology that reduces demand for fossil fuels will apply a downward pressure – at least in the short term – to the fuel’s price; this incentivises other players to buy the fuel – and use it inefficiently. For this reason, technological solutions to global warming will need to be coupled with international laws and taxation schemes that ensure that fossil fuels and trees stay in the ground. The value of technological solutions arguably lies in making the transition to a low carbon economy politically feasible.

Just as with a war, a project of this magnitude would obviously not be cheap. But it would be good value when compared to trying to fix the problem once it has got worse, or adapting to it once it has become severe. As the 2008 banking crisis and COVID pandemic have clearly demonstrated, the world can generate vast sums of money in times of emergency.

Countries can do the research and development together, and gift the intellectual property to the world. Or they can do it individually, and reap the returns on their investments – gifting the proceeds to their citizens who ultimately backed the programmes. This way, countries do not have to rely on broad multilateral action. They do not have to ask ‘what about the polluters who do not contribute?’. The answer is simple: those countries will contribute by buying the new technologies after they have been developed. Because they will be efficient and effective – as well as low- or zero-carbon.

It is easy to be pessimistic about global warming. It is easy to see it as a problem that is too big, too complex to tackle. But history has shown us that research in science and technology can solve enormous problems. Fast. And as COP26 has so clearly reminded us: time is once again of the essence.

“History has shown that when nations come together in common cause, there is always room for hope.”

Dr Andrew Bodey is a scientist and science writer with a background in sustainability consulting.

‘A full version of this article will appear in the Winter edition of Science in Parliament’.