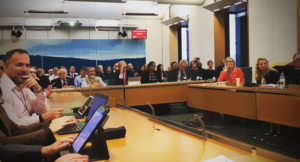 Membership is open to all members of both Houses of Parliament, Universities, Scientific and Technical Organisations, industrial companies and organisations representing those affected by science.

The Committee meets once a month when Parliament is sitting to debate a scientific or technological topic and its relationship with political issues. These take place in the Palace of Westminster, starting at 5.30pm and are followed by an informal reception. Most are followed by a working dinner where the informal atmosphere facilitates open and wide-ranging discussion between Parliamentarians and those most closely concerned with the evening’s topic.

The Committee arranges occasional visits to industrial and scientific establishments. A party of a dozen or so will include two or three Parliamentarians who will thereby have an in-depth introduction to an aspect of the world of science or technology.

The Committee’s annual lunch is a significant event in the Parliamentary calendar. Parliamentarians and leaders of the scientific establishment and industry assemble to hear an address. The Guest of Honour in 2013 was Sir Mark Walport, Government Chief Scientific Adviser.

Into the deep – Discovering our Oceans
Scroll to top