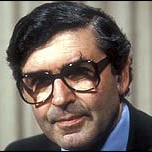 The Parliamentary and Scientific Committee is very sorry to hear of the death of Lord Jenkin of Roding.

He was our President for more than five years

In this role he was always conscientious, reliable and polite to the nth degree. He was also warm and supportive to individuals.

He was one of those rare people who always seemed to have a twinkle in his eye, as if he was REALLY enjoying what he was doing.

He was one of that increasingly rare breed able to declare that he had never received a formal science lesson in his life! (Keith Joseph made the same claim). Patrick himself never stopped apologizing for this lacuna in his CV, although he clearly did his best to make up for it.

And yet Patrick espoused the benefits of science like few well qualified scientists. His lasting memorial, which is still regarded as THE bible for interaction between scientists and the lay public was the House of Lords Report which he chaired more than ten years ago. It has not been necessary to revisit this (only to implement it!) because it said it all.

He was also a talented singer and many of us will have enjoyed hearing him in the Parliamentary choir singing Messiah.

He was a charming man who enriched all those whose lives he touched.